Joel Fodrie, joint assistant professor of marine science at UNC-Chapel Hill, and Christopher Baillie, postdoctoral researcher at East Carolina University, conducted and authored the study. To conduct the study, Fodrie and Baillie interviewed high-ranking fisheries managers from 20 of the 23 coastal states. Extracting valuable information from the interviews as well as from published literature, the researchers synthesized fisheries management practices for each coastal state to see where North Carolina fits in.

“The intent of the study was to put North Carolina in a lens and see what the state has, doesn’t have, strengths, weaknesses, pitfalls, in comparison to the other coastal states responsible for governing marine resources in coastal waters,” said Mason Phipps, Executive Director of the North Carolina Marine & Estuary Foundation.

As a synthesis of fisheries management practices, Phipps said the assessment could be used as a go-to resource for complex issues. He said the assessment could help understand how other states may have handled similar issues. Fodrie also recalled the study as a fact finding mission. He said it was not meant to be a solution but meant to inform North Carolina of how other states are managing fisheries and uncover additional research questions.

Some of the fisheries management strategies evaluated by the research team included limited entry, gamefish designation, stocking programs, gear prohibitions and quota allocations. Overall, the researchers found the use of one of these strategies tends to be more effective when used with other strategies or management tools. Additionally, due to the need for strong scientific understanding of the strategies and their impacts, researchers also emphasized that state fisheries managers have access to adequate resources to conduct research to make informed decisions.

Limited entry is a fisheries approach that regulates who and how many can fish commercially. However, the study found that technological innovations and advancements have made it possible for a fewer number of fishing vessels to catch higher quantities of fish, emphasizing the need to use this strategy with others. Additionally, according to the research, states report there are too many licenses issued, many of which are inactive and transferable, which creates uncertainty and fluctuating numbers. To combat this, active-use requirements and non-transferability of licenses can be implemented. The limited entry strategy is utilized in North Carolina.

Gamefish designation is when a species is prohibited to be commercially sold but is allowed to be fished recreationally as gamefish. The study found that in most coastal states, at least one fish species is designated as gamefish. According to the research, this strategy has the ability to relieve administrative burden, reduce conflict, and improve fish populations. However, researchers note that recreational fishers are increasing in numbers and efficiency, which can have impacts on fish populations, emphasizing the need to use this strategy with others.  In North Carolina, there is a catch and release regulation on one fish species, the tarpon.

Fishing gear prohibitions is an approach that bans certain gear that may have large impacts on marine resources and habitats. The study found that this strategy can reduce burdens on fisheries and its habitats, reduce bycatch, prevent habitat destruction, and protect endangered or threatened species. It is also used to prevent industrial fishing, fishing conflicts, and out-of-state fleets. Due to the contentious nature of gear bans, the researchers recommend that decisions are made based on strong scientific research. North Carolina does not have any gear prohibitions.

Quota allocations are limits on the amount of fish allowed to be caught. For coastal fisheries, the total quota is divided between the commercial and recreational fishing sectors. The researchers found that these limits are based on historical catch data rather than economic or ecological data and that this method is the least contentious. The study found that managers’ report there are no in-house natural resource economists or social scientists, which could explain the lack of state agency data on the socioeconomic impacts of quota allocations. This highlights the need for expertise in other disciplines.

According to the research, some managers also reported there is an effort to move towards a more biological and ecosystem-based management approach for deciding quota allocations. However, biologists would not make quota allocation distinctions between the commercial and recreational fishing sectors. In North Carolina, there are commercial quota allocations for the red drum and striped bass. 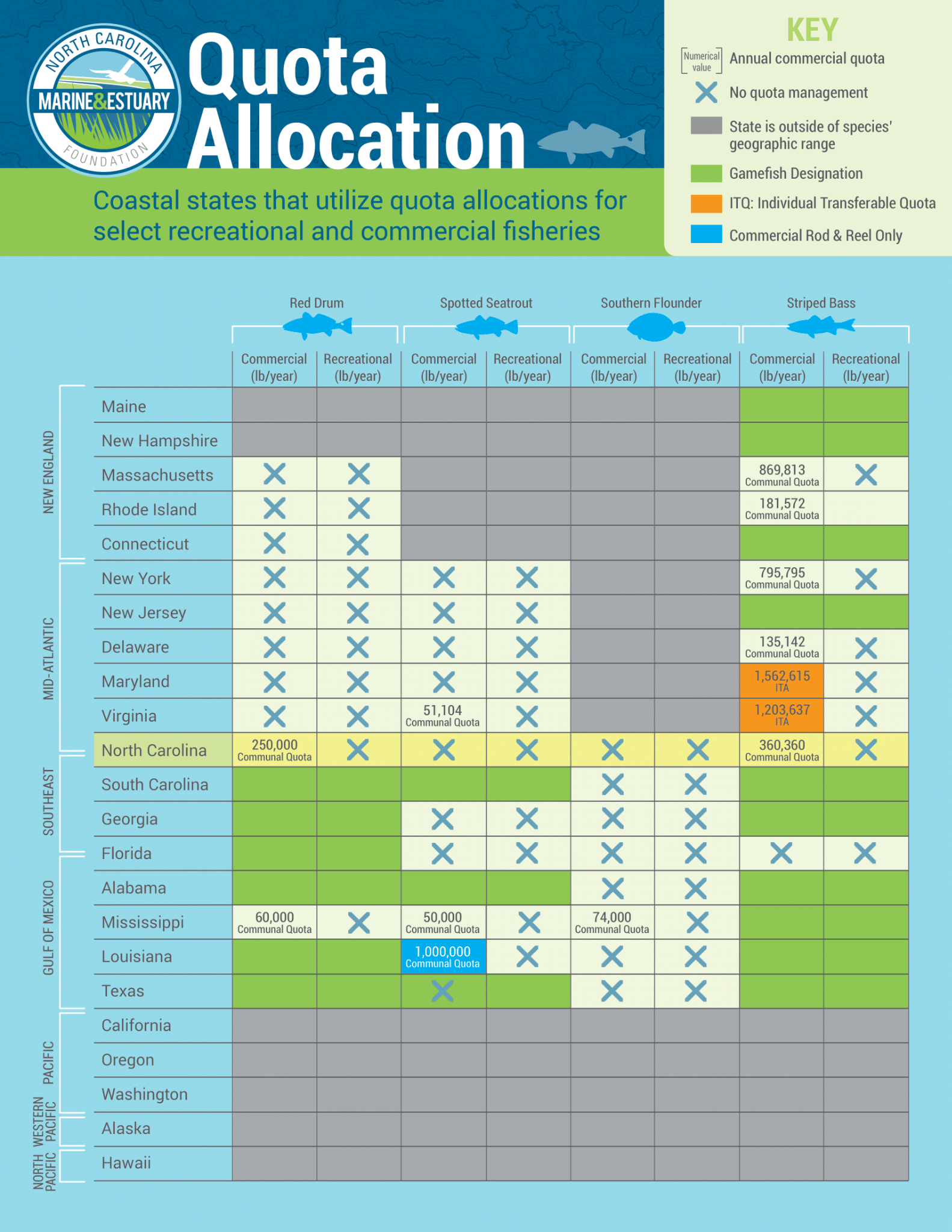 Fodrie noted that while it’s imperative to have good science and professional biologists’ input in fisheries management, many questions fisheries deal with require the expertise of other disciplines such as cultural, economic, and social disciplines. He said this pertains to fisheries strategies like gamefish designation, gear bans, and quota allocations as these decisions incorporate other aspects and disciplines other than just fish biology. Marine scientists and fish biologists are primarily concerned with the number of fish being caught and if the population can sustain that amount.

Baillie said due to the context dependent nature of fisheries and the many considerations to take into account, the study did not come away with specific actionable recommendations. However, he said the study allowed them to identify the topics that stand out as having research gaps.

Those involved also said the study allowed them to identify the next set of research questions to answer. In terms of next steps, the gaps in the literature and additional research questions serve as an opportunity for further research.

Sascha Medina is a second-year graduate student completing a dual degree in Environment and Science Communication.