Today, less than one percent of global lithium is mined in the United States, all from a single mine in Nevada. There is renewed and growing interest in the resource of lithium, as it has become critical to battery energy storage. A region across the central part of North Carolina to the border of South Carolina has potential as a significant source of lithium. Research is underway to find a way to efficiently extract lithium, part of which is led by Dr. Hemali Rathnayake at the University of North Carolina at Greensboro.

“Our technology will bring back the lithium supply chain to North Carolina with minimal environmental impact, low carbon footprint, and less water and energy consumption, while booming the job growth in the region.” 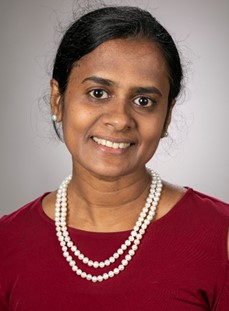 Can you explain the technology in development?

How effectively would the technology save time and expense for the lithium extraction process?

Current brine operations are capital-intensive and incur significant lead time with low recovery for producing lithium. The technology reduces the brine operation cost of high lithium recovery by more than half of the current costs. Further, the extraction time of lithium moves from two years to less than 48 hours.

What are the social and economic impacts of this technology?

How would your research and this technology benefit the citizens of North Carolina?

Our technology will bring back the lithium supply chain to North Carolina with minimum environmental impact, low carbon footprint and less water and energy consumption, while boosting job growth in the region.

During the 1950s through the 1980s North Carolina was a home to the largest lithium suppliers in the country. In the 1980s, production moved to lower-cost operations overseas. With efforts to cut emissions and transition to clean energy sources, demand for the metal is increasing, and the U.S. is looking for ways to ramp up production.

The U.S. Geological Survey estimates that three known spodumene deposits in the region – around Kings Mountain, Bessemer City and Cherryville – contain a combined 426,600 metric tons of lithium. That amount, which includes reserves that could be economically extracted at present as well as other estimated resources, would be enough to supply batteries for over fifty million electric vehicles.

For more information on Dr. Rathnayake’s research, check out her work at Minerva Lithium.